skip to main | skip to sidebar

Vellore boasts of a historical Fort that's a few hundred years old - the biggest landmark in the city, also the monument that gives Vellore the name ' Fort Town'.
The Vellore Fort is made of granite blocks and is surrounded by a moat. History says that there used to be alligators in the moat, enough to deter any unwanted intrusion attempts. There are no alligators now, but visitors can now take a boat ride around the fort for a very small fee. The Fort and the area around the it is now under the Archaeological Survey of India, and is a protected monument. Inside the fort are a few Government offices, a Police training unit, a temple, a Church, and a Mosque.
Jalakanteswara Temple: 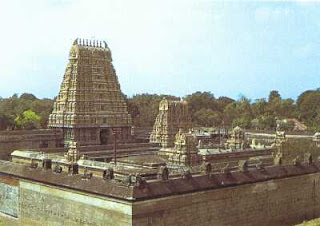 The Jalakanteswara temple is located inside the Vellore Fort , and is an exquisite piece of Indian Art. The temple is constructed of carved stone. Interestingly enough, this was one of the seven 'Wonders' of Vellore - a temple without a God!
History has it that a temple dancer was murdered in the temple court. Since the murder desecrated the temple, the idol was removed to a temple a few kilometers away and was there for over 200 years! In recent times, though, the idol has been returned to its initial place.
Inside the temple is a well that is supposed to have a secret passage to the temple in Kancheepuram, about 75km from Vellore. Interestingly, this temple has survived times of being occupied by Muslim rulers like Hyder Ali and Tippu Sultan.

Also located inside the Vellore Fort is the St.John's Church. This was built in1234 by the British Colonists who had occupied the fort. This bears stark contrast to the architecture of the temple in the fort, in the absolutely Anglican style it is built in. Though renovated, the majority of the original structure has been preserved as also the looks.
CSI Central Church: This islocated opposite the Vellore Fort. It is largest Church in Vellore. It also has a historical Cemetery where many freedom fighters were buried. Also here one will find a memorial to the soldiers who died in the Vellore mutiny of 1806.
Vellore Museum: The Vellore museum is not a very large museum, but is certainly a unique one. Run by the Government, the museum has a good collection of paintings and ancient artifacts that go back all the way to the Cholas and the Pallavas (17th Century AD).
Clock Tower: The clock tower in the Vellore Market was built in 1928 AD and bears a stone inscription that reads "Vellore - From this village 277 men went to the great war 1914-18, of them 14 gave up their lives".
Muthu Mandapam: Located near the Palar river, in a rather inconspicuous place is the Muthu Mandapam. Though built recently (1990), this is built in memory of Vikrama Raja Singhan, the last Tamil ruler of Ceylon (Sri Lanka)
Posted by Thiyagarajan at 9:21 PM 0 comments 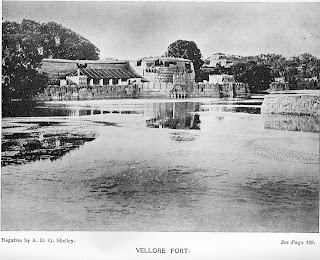 History
The Fort was built around 1566 by Chinna Bommi Nayak and Thimma Reddy Nayak, subordinate Chieftains under Sadasiva Raya of theVijayanagara Empire. The Vijayanagara kings called it "Raya Vellore" to differentiate it from "Uppu Vellore" in the Godavari region. The name Vellore is also spelt "Belur." The present day Chennai region and Tirupathi were under the domain of the Fort.
Under the Vijayanagara Empire (1566–1656)
Vellore Fort gained strategic prominence following the re-establishment of Vijayanagar rule after the Talikota battle in Chandragiri. The Aravidu Dynasty that held the title of Rayas in 17th century resided in this fort, using it as a base in the battle of Toppur in the 1620s. This major battle took place for the claiming of the Raya title between two faction of the Raya family. Each faction was by their respective subordinates; theNayaks of Tanjore, the Gingee and the Madurai taking sides to suit their interests.
The Rayas also had long-running battles with their long time rivals, the Bijapur Sultans, and with the Nayaks of Madurai and the Gingee over non-remittance of annual tributes. In the 1640s, during the reign of Sriranga Raya III, the Fort was briefly captured by the Bijapur army, but was eventually recaptured with the help of the Nayaks of Tanjore.
During Sriranga Raya's reign in 1614 a coup broke out within the royal family and the reigning Emperor Sriranga Raya and his royal family were murdered, with the younger son Rama Deva Raya of the Emperor smuggled out from the fort by several supporters. These events led to the Battle of Toppur in 1616, one of the largest South Indian wars of the century,[citation needed] with all other Nayak rulers of Tamil Country taking part. The war was won by the legal claimants with the minor Rama Deva Raya getting crowned as the Aravidu Vijayanagara Emperor in 1617.
In 1639, Francis Day of the East India Company obtained a small strip of land in the Coromandel Coast from the Chieftains of Vellore-Chandragiri regions to do trading, which is now in present day Chennai.
Capture by Bijapur (1656–1678)
In the 1650s, Sriranga allied with the Mysore and Tanjore Nayaks and marched south to attack Gingee and Madurai. His first stop was the capture of Gingee Fort, but Thirumalai Nayak of Madurai responded by requesting the Sultan of Bijapur to attack Vellore from the North to divert Sriranga's attention. The Bijapur Sultan promptly dispatched a large army and captured Vellore Fort. Subsequently, both the Madurai-Bijapur armies converged on Gingee, defeating the Vellore-Tanjore forces. After a melee, both the Forts ended up in the hands of the Sultan of Bijapur. The defeat also marked the end of the last direct line of Vijayanagara emperors. Within 20 years after this incident, the Marathas seized the fort from the Bijapur Sultans.
Capture by Marathas (1678–1707)
In 1676, the Marathas under Shivaji marched south to the Tanjore country, which had recently been attacked and captured by Chokkanatha Nayak of Madurai. That same year, Ekoji, the brother of Shivaji, took control of Tanjore, but was under threat from his immediate neighbours Madurai and Bijapur Sultans, based in Gingee and Vellore respectively. Shivaji's army first captured the Gingee Fort in 1677, but left the task of attacking Vellore to his assistant and rushed to Deccan as his territories were being attacked by Mughal Emperor Aurangazeb. In 1688, after a prolonged fourteen-month siege, the Fort passed on to the Marathas. Shivaji's representative strengthened the fort's fortifications and ruled the area in relative peace.
Capture by Mughal Army (1707–1760)
In 1707, the year that Aurangazeb died, the Delhi Army under Daud Khan captured Vellore Fort after defeating the Marathas. The struggle for the Delhi throne empowered the Deccan Muslim governors to declare independence. In 1710 the recently established Nawab of Arcot under Sadat Ullah Khan followed suit. Dost Ali, the latter's successor in 1733, gifted the fort to one of his sons-in-law.
Under control of British (1760 –1947)
Following the decline of Madurai Nayaks and coinciding with the emergence of the British on the Madras coast, the Nawab and his sons-in-law broke out into a feud over the title of Nawab. The Nawab was supported by the British and the rival claimants by the French resulting in theCarnatic Wars. The British Nawab's victory in the 1760s in the Battle of Plassey finally sealed the fate of the French in India and launched Britain's dominance of the Indian subcontinent. In addition, the British took possession of Vellore fort with relative ease and used the Fort as a major garrison until the Indian independence.
In 1780, the Fort was attacked by Hyder Ali in his wars against the British, but an English garrison held out against Hyder Ali for over two years.


First Sepoy Mutiny (1806)
Main article: Vellore Mutiny
In 1806, Vellore fort was used by the British to station Infantry Military units of the Madras Regiment. The British Commander in chief of the Madras Army prescribed a new round hat for soldiers, which would replace turbans, and the removal of beards, caste markings and jewellery. The Sepoys considered this offensive, and the situation was worsened by rumours that the hat was made of the hides of cows and pigs.
On July 10, 1806, before sunrise, Indian Sepoys stationed in the fort attacked the European barracks there, and by late morning had killed about 15 Officers and 100 English soldiers and ransacked their houses. Some of the rebelling soldiers also instigated the sons of Tipu Sultan to lead the campaign. The news quickly reached the colonel commanding the Cavalry Cantonment in Arcot, who reached the Fort with heavy battalions. The rebelling Sepoys, numbering more than 800, were mercilessly hounded and killed, and by noon the rebellion was put down. The events lead to a Court inquiry by the British, who decided to shift the Tipu Sultan's family from Vellore to faraway Calcutta, in isolation.
The news of the Vellore Rebellion sent shockwaves to England. The Governor, William Bentinck, and Commander-in-Chief of the Madras Army, Sir John Cradock both were recalled on this count. This was the first rebellion experienced in the fort by the British.
Posted by Thiyagarajan at 9:17 PM 1 comments 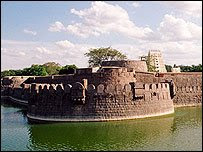 Vellore Fort (Tamil:வேலூர் கோட்டை) is a large 16th-century fort situated in Vellore city near Chennai, in the state of Tamil Nadu, India. It was built by the Nayakar governors of the Vijayanagara Empire and was constructed with large granite blocks. The fort is known for its grand ramparts, wide moat and robust masonry.
The Fort's ownership passed from the Nayaks, to the Bijapur Sultans, to Marathas, to the Carnatic Nawabsand finally to the British, who held the fort until India gained independence. During British rule, the Tippu Sultan's family and the last king of Sri Lanka, Sri Vikrama Rajasinha were held in as royal prisoners in the fort. The fort houses a Christian church, a Muslim mosque and a Hindu temple, the latter of which is famous for its magnificent carvings. The first rebellion against British rule erupted at this fort in 1806, and it is also a witness to the tragic massacre of the Vijayanagara royal family of Emperor Sriranga Raya.
Next>>
Posted by Thiyagarajan at 8:42 PM 4 comments